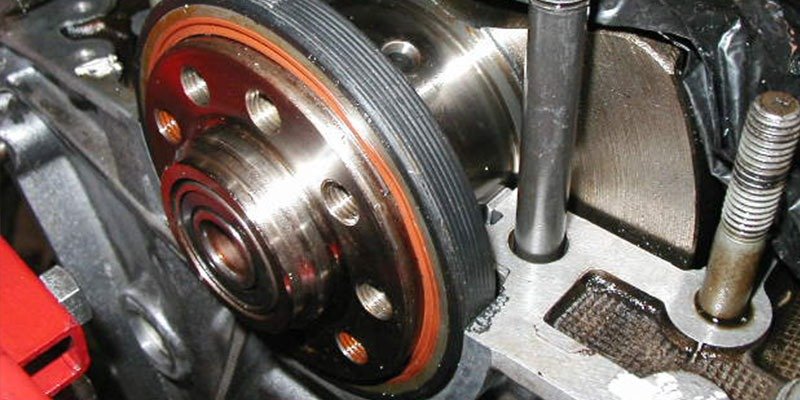 When checking my car’s rear main seals, what should I look out for?

A leaking rear main seal can cause serious damage to your vehicle. If left unchecked, it can result in costly repairs and even total loss of the car. Problems with engines are common, but some are more serious than others. A failing rear main seal leak is one of the most dangerous problems for your car or truck. It is also one of the easiest to fix.

If you notice the oil puddles beneath your vehicle, this oil stain is an alarming sign that something is wrong with the rear main seal leak. Especially when the engine is running, you should consult your mechanic if you are not confident in inspecting your vehicle.

Check the valley pan and Cover gasket using a flashlight under your car for any leaks.

If you need to replace the seal, you need to remove the oil pan and then disassemble the transmission or engine, which can be done only by experienced technicians.

Rear main seal replacement is one of the costliest and labour-intensive repairs that may cost you around $600 to $900. If there is any rupture inside the engine or any component related to it, it may lead to a rear main seal leak. You can go with a temporary solution to differ this cost for some time.

Let’s find out what the real main seal is? What are the causes of the rear main seal leak? What are its symptoms to have a thorough understanding of it!

What Is a Rear Main Seal? 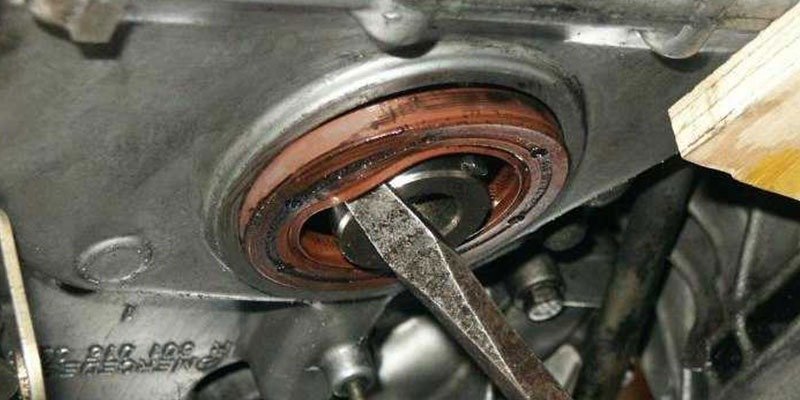 You can find the real main seal between the transmission and engine at the back of the engine. It is used to seal the crankshaft’s back end to prevent oil from leaking. As you need to dismantle the engine and remove the transmission,  fixing or replacing a rear main seal involves a considerable cost.

The rear main seal is usually made up of rubber or silicon. As a result of crankshaft rotation force and corrosion from road salt, the seal may wear out over time.

What Are the Symptoms of a Rear Main Seal Leak? 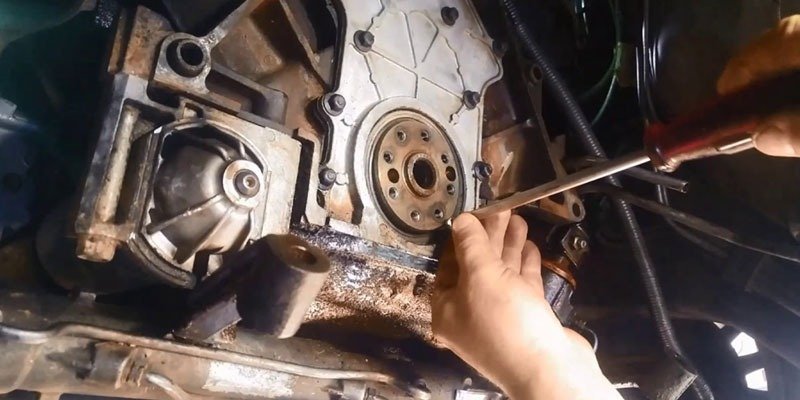 Rear main seal failure is difficult to detect since the location of this seal is hidden. When the engine oil begins to leak, the owner should check the fluid level. If the oil level drops significantly, then the engine needs to be inspected thoroughly to locate the reason for this leaking oil.

However, you should check for the following symptoms that indicate a rear main seal leak: 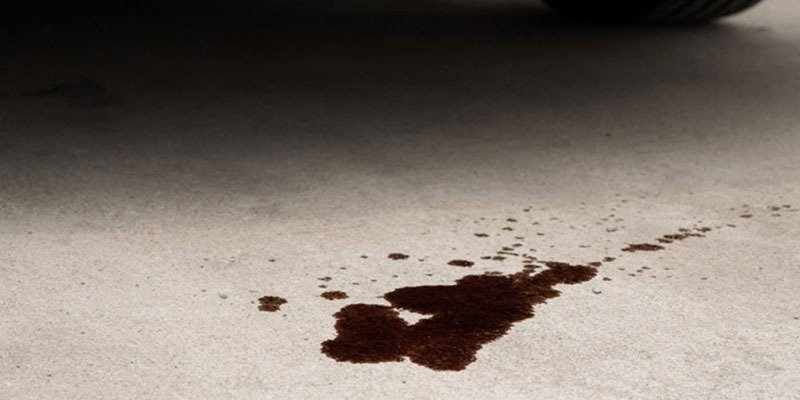 Cars need oil to run smoothly. Rear oil dripping doesn’t always show up as spots on a stretch of pavement. You may notice a slow-growing stain in your driveway, but other factors could also cause it.

When cars are moving, the oil tends to move around and hide the fact that there is an oil leak. It means that the car may not show signs of oil leakage until it is stopped and idled. You can check if your car is leaking by stopping it and letting it sit for 15 minutes.

Then, open up the hood and look for any oil on the car’s underside. 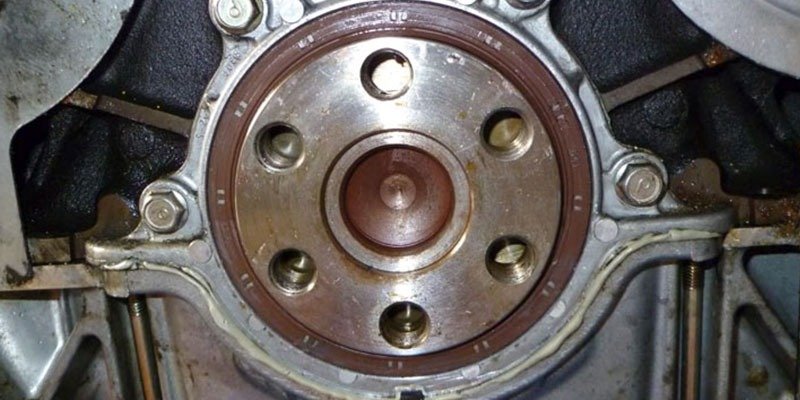 Any rear crankshaft seal leakage attracts the accumulation of debris and dirt around the seal. Oil act as an adhesive, leading to debris deposition. It is an early sign of a leaking component.

Any accumulation of dirt between the engine and transmission is a clear indicator of a leaking crankshaft seal.

Smoke Under the Vehicle

While the former represents excessive oil burning, the latter indicates leaking of the rear crankshaft seal.

Using an oil stop leak is not recommended in either case as it indicates serious problems such as too much engine oil leak that may lead to engine failure. 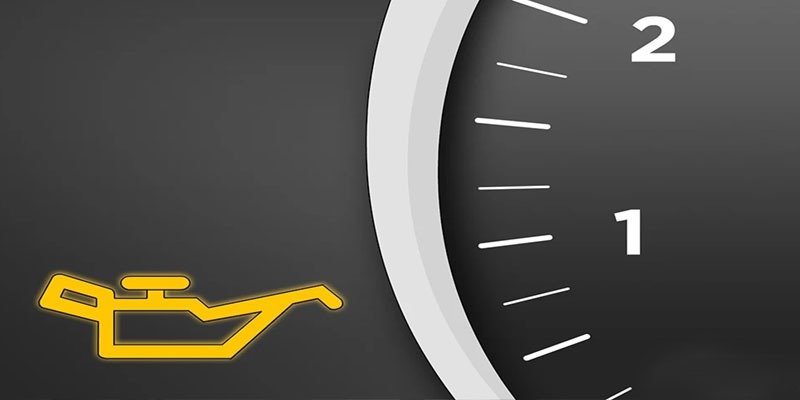 Low oil pressure leads to turning on the oil light, indicating that it’s time to refuel the engine oil. However, it may also be too late to fix the problem as there could be many engine oil leaks.

What are the Causes of the Rear Main Seal Leak? 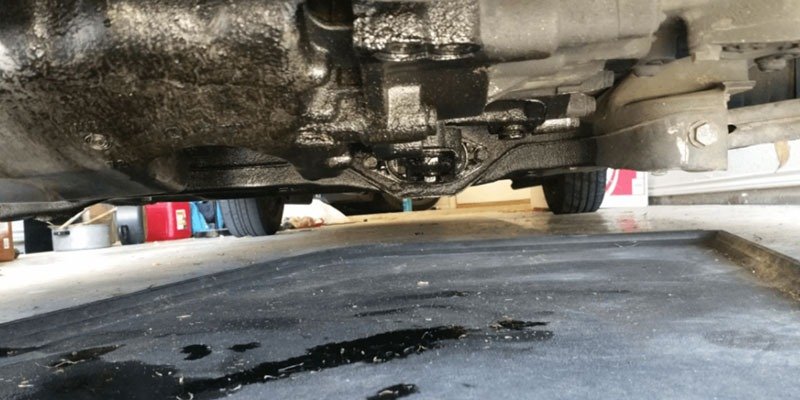 Here are the main causes of the rear main seal leak:

A damaged flex plate or problem with input shaft transmission stresses the crankshaft seal and leads to an oil leak. This flexplate is located on the automatic transmission. In the case of a manual transmission, check for the input shaft. 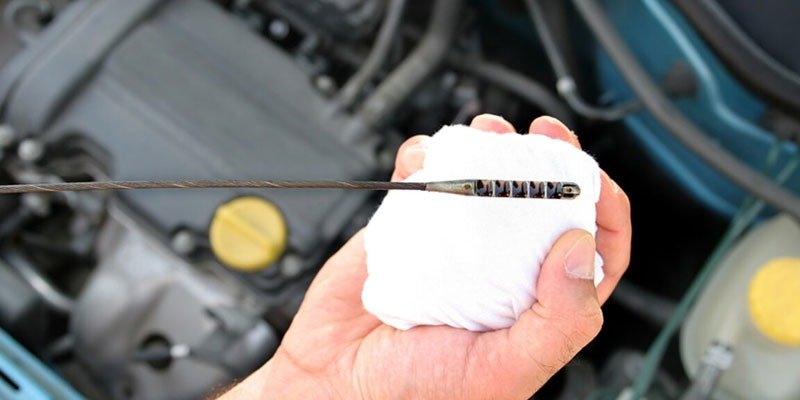 The wrong type of engine oil or the low levels of engine oil often leads to a leak in the rear crankshaft seal. These engine oils have chemical additives which impact the seal adversely. Irregular oil change also leads seal deterioration.

The buffers in the oil deplete the seals over time. The drying off at the inner lip of the crankshaft makes it stiff. The inability to seal the crankshaft leads to a rear main seal leak.

The main Bearings are Worn Out.

If the main bearing of your vehicle engine wears off, the crankshaft will dangle inside the bearing. It will lead to moving and stretching the rear crankshaft seal when the engine runs.

The main bearing wears off due to engine movements. In this case, you need to rebuild the vehicle engine and replace the vital engine parts, including rear crankshaft seal replacement. 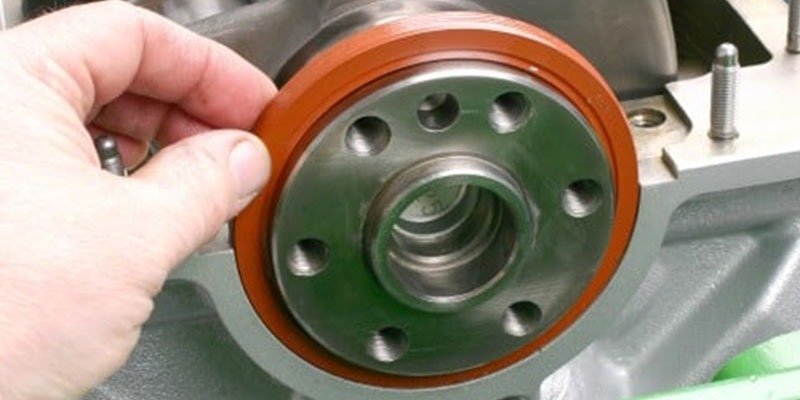 The polytetrafluoroethylene coating on some of the rear crankshaft seals transmits the PTFE layer to the crankshaft. It prevents the wearing off and provides better sealing compared to silicon materials. Any coating of oil during the seal installation may lead to the oil leak for a shorter duration. 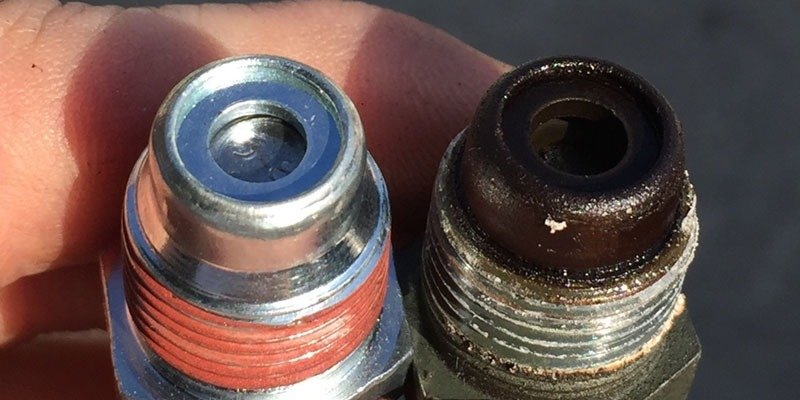 Worn-out piston rings due to excessive turbocharged engine blow are another common reason for increased crankcase pressure. It also results in oil leaks by impacting the seals adversely.

How Can I Fix My Car’s Rear Main Seal Leak Problem?

As we know, the engine seals deteriorate over time due to health, oil additives, and various other reasons. Hence, it becomes imperative to replace the engine seal to avoid any catrascopic effect on your vehicle and its engine.

Check the seal if it is slightly deteriorated or misaligned. You don’t need to replace the entire seal. A little deformity can deal with reconditioning, leading to rear main seal repair.

Steps to Recondition the seal

If you have big holes. or chunk in the rubber seal, the best way to fix a rear main seal leak is to replace the seal.

Steps to Replace the Main seal: 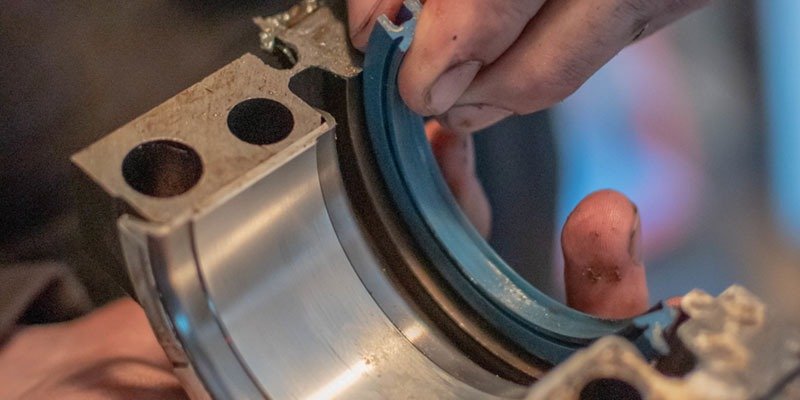 To remove the starter, disconnect the negative terminal of the battery. It helps in escaping any jolts or shocks due to electric circuits.

Disconnect the torque converter from the flexplate if working on an automatic transmission. Use the correct socket size in the ratchet handler to remove the converter screw from the torque.

You have to turn the engine clockwise after removing each bolt to reach the other bolt.

FLywheel and clutch need to be dealt with under manual transmission. If you are on automatic transmission, you need to remove only the flex plate.

Removal of Seal bolts and Seal 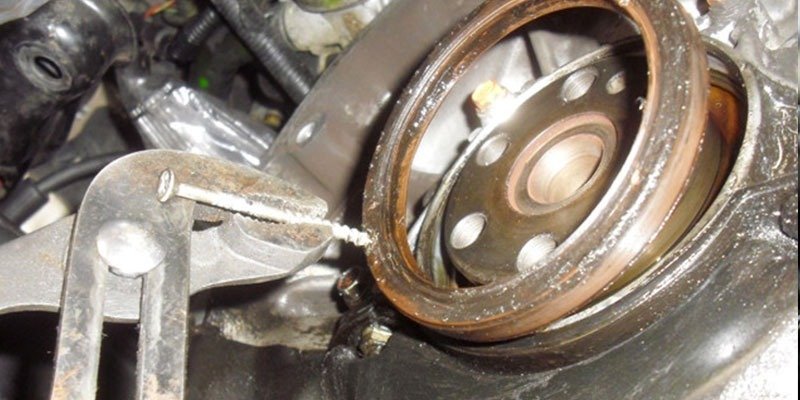 Once you remove the flexplate, clutch and transmission, you reach the rear main seal. You may find the crankcase bolts linking to the rear crankshaft seal housing. To remove this, you need to loosen its bolts.

There will be 10mm and 12mm bolts placed over to hold the engine block. Remove the seal housing by removing all these bolts. Pry off the bell housing gently to remove the rear main seal if you find it stubborn for removal. 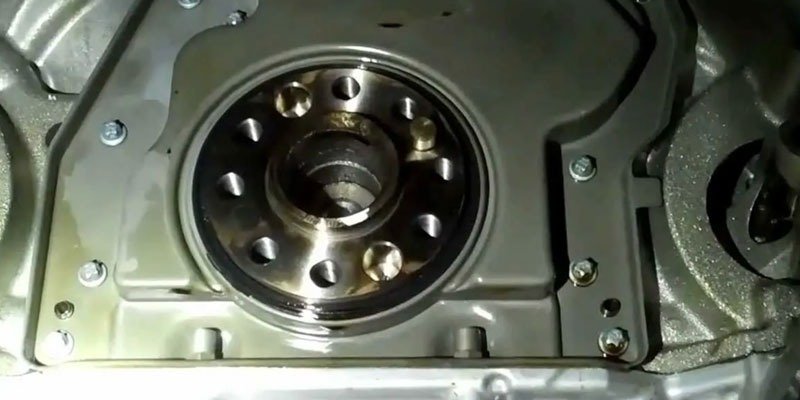 Now compare the new seal with the old seal to check if they are the same by size. Measure the inner and outer diameters to compare. Now clean the housing carefully before installing the new seal. To get rid of seal debris, you can use a gasket scraper.

Now place the new seal into the housing and hammer it gently. Coat the seal with oil and apply a sealant to its surface.

Now mount the housing by securing its bolts along with crankcase bolts. Now reverse the entire process to reinstall all the components.

How much does it cost to repair the rear main seal leak?

The typical estimated cost for the main seal stands between $700 to $900. As it is a labour-intensive task, you may need to incur another $600 to $900 as labour charges to conduct the overall replacement.

Yes! The rear main leak is serious that can damage your engine if not taken care of well in time. A slightly punctured seal has an adverse effect from crankshaft motion leading to large breakage. Once the seal tears apart, there will be a high outflow of engine oil, reducing the engine oil to an extreme level. Lowering the engine oil levels leads to higher friction and wearing off for the internal engine components.

For deteriorated and shrunk seals, this method works well. This method restricts the crankshaft seal leaks, but it can also work for other engine oil leaks such as timing cover seals, O-rings and camshaft seals.

How long does it take to replace a rear main seal?

It is a tedious task involving the uninstallation and reinstallation of several components. As mechanics need to find out the real reason for an engine oil leak in the first instance, only an experienced mechanic can help you with this.

The rear main seal leak needs to be addressed in time as any ignorance of this can lead to serious engine damage. However, replacing the main seal is not as easy as it seems. You should consult an experienced mechanic to diagnose the issue if you find any oil leaks. 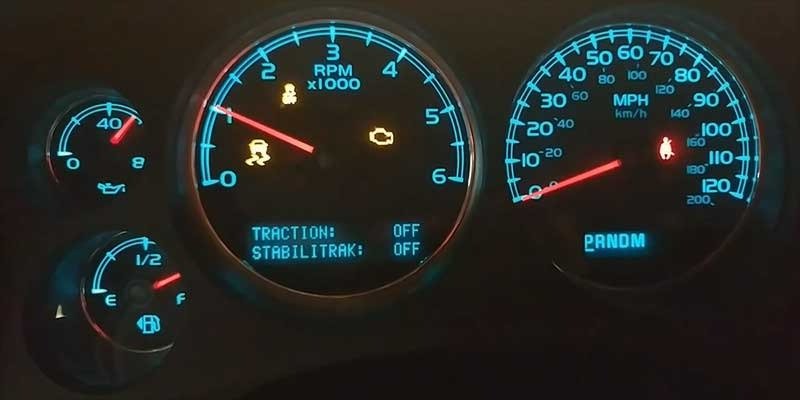 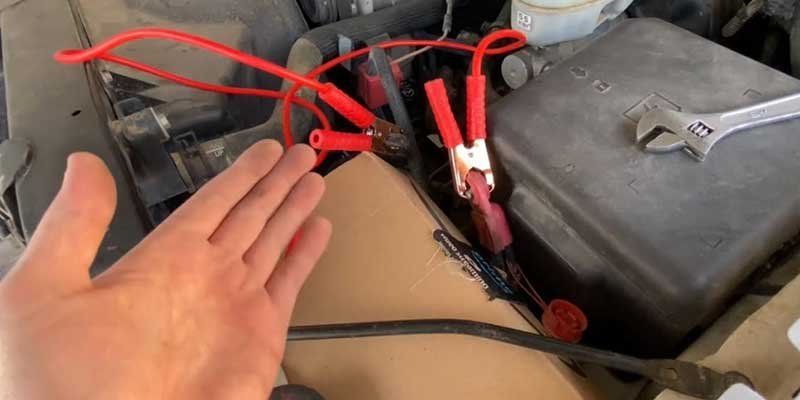 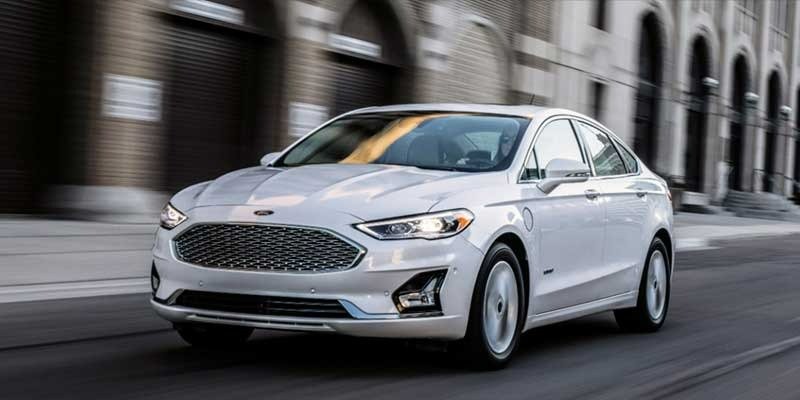 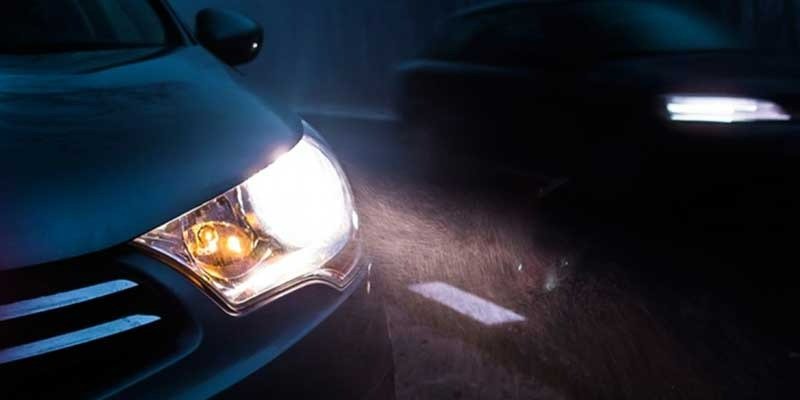 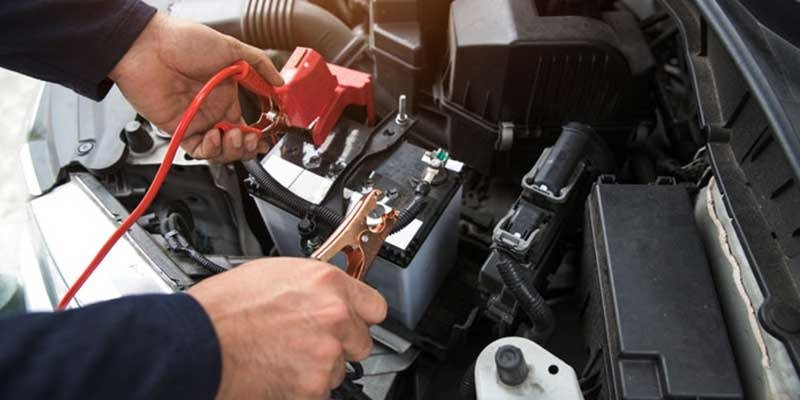 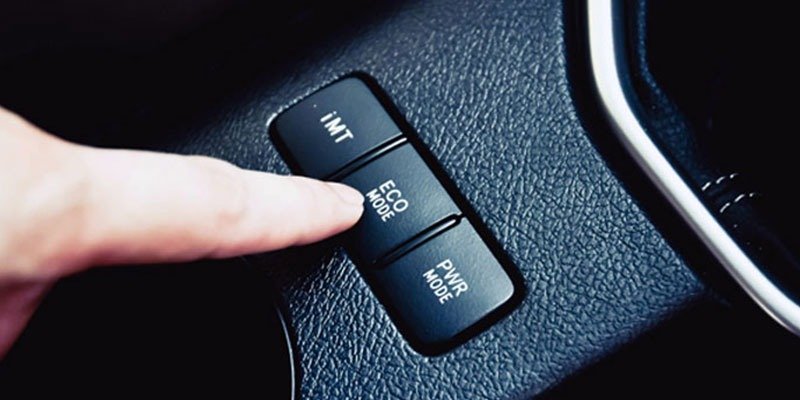